Neuroscience is a Language, Can Word Games Help?

You already know that I am neuroscientist. What you may not know is, I also love board games. When I first began teaching introductory biology courses, I found myself telling students that learning cell and molecular biology is very much like learning a new language. It would take time and practice, in many different forms, to gain fluency. Moreover, just learning the meaning of the words wasn’t enough. Language is complex, with the same words taking on varied meanings based on the context. In fact, I wanted to actively demotivate rote memorization of definitions as a study tactic.

Taboo, a popular board game, requires players to work in opposing teams, each team trying to guess the taboo word that players are not allowed to say. In addition to the taboo word, the game card contains several other linked words that also remain taboo – the player cannot use any of those words to describe the primary word they are trying their teammates to guess.

This seemed like the perfect game to adapt into a learning system that encouraged deep learning of terminology rather than simply learning the definitions that populate the indexes of all undergraduate textbooks. How? Simple – make key words from the formal definition of neuroscience terms Taboo.

Let me give you an example.

A new term students may encounter in an introductory neuroscience course is the blood brain barrier (BBB).

This term describes an important structure in the brain that is used to protect the brain from the ever-changing content of our blood. Why is this important? The primary way in which our neurons talk to each other is through changes in the concentration of specific molecules (charged ions) within individual cells. So, for our brain to function properly, there must be somewhat steady levels of ion concentrations both inside and outside the neurons under normal conditions. There are many structures in the brain that work to keep the concentrations of important ions (like sodium and potassium) relatively constant within the brain, and the blood brain barrier is a vital part of this process. 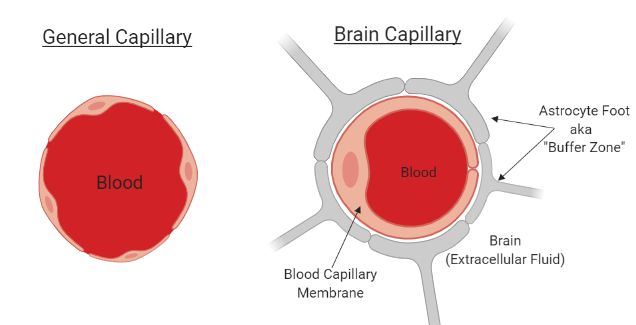 Figure 1: Differences in capillary structure in the body (left) vs. in the brain (right). Made using BioRender

The BBB is formed through in the blood capillary structures in the brain. Capillaries are small blood vessels that carry blood to and from tissues, and cells use these capillaries to receive more nutrients and get rid of waste by moving molecules through the capillary membranes. Unlike capillaries in the rest of the body, those in the brain have smaller and fewer openings in their membranes, creating less opportunities for molecules to freely pass from the blood into the brain (illustrated in the figure to the right).

Understanding what makes the blood brain barrier work is particularly important in the field of Neuropharmacology (one of my course offerings), because any medication you take must be able to pass through the barrier to be able to treat your symptoms. When presenting this concept in class, I highlight the importance of maintaining steady levels of ions in the brain with a news story. In 2013, a 19-year-old was dared by his friends to drink a quart of soy sauce, a game that ended with him going into a coma because of the salt imbalance in his blood stream! Thankfully, he survived, and did not suffer any long-term damage from the incident. This story can anchor student’s understanding of structures like the blood brain barrier, and why protecting your brain from your blood can be a matter of life and death!

So, how can we encourage students to learn the concept of the blood brain barrier through a game like Taboo?

The definition of the BBB in the textbook I used in this course is: 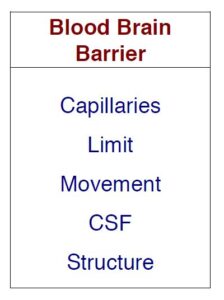 Based on this definition, I created the game card as shown. So, the student with the card has to come with a new way to describe this structure, perhaps “it’s the thing that keeps your neurons safe from things that you drink!” By asking students to creatively engage with new terminology through game play, we can promote positive associations with learning as a fun activity, that is rewarded through bonus points, and the praises of classmates marveling at an expertly designed clue. This gamification also forces students to think outside of the traditional confines of science, an important skill in effective science communication.

Some strategies for implementation

My favorite part of the game play is observing students using popular culture references to nudge their teammates in the right direction. I found these instances very powerful, because the students were actively linking their current knowledge, thus far unlinked to science, with the course material. This led to deeper learning, and brought play back into the learning equation. Often students believe being in a science class has to be difficult and that creativity cannot make it easy or enjoyable. But this exercise proves otherwise. Students typically engage deeply with the game, investing in their team identity, and coming up with clever ways to get their teammates to the right answer. And they typically leave the class period energized by the experience.

Final Note: Thinking Outside the Box

One day, a team that had opted out from the review game in my Introductory Neuroscience course requested a deck of playing cards anyway. When I asked why, they said they were using the game cards as complex flash cards. Rather than simply playing the game, this team was defining each set of words on the card, and trying to articulate the links between the different terms. I was impressed at their insight – the cards I had created were perfect for this type of application-based study strategy. As I left class, I made a note to myself to suggest this strategy with future cohorts in the class.

Though I came to the idea on my own, it is by no means a unique idea – a quick literature search shows a number of discipline-based game cards designed to mimic Taboo. Uses of this game structure is reported in STEM pedagogical literature in the field of Chemistry (Capps, 2008), Biology (Olimpo, 2010), and Mathematics (Harmon, 2008).

Want a pre-made set of cards for your Introductory Neuroscience or Introductory Cell and Molecular Biology course? Or just a template to make your own cards? Send me an email and I’ll share the requested resources!